The first time the real dread hit me was when we were parked at Dover Docks waiting to board our ferry to France.  Having already mastered two lots of directions – from our house to our friends' in Rochester and from them to our Hotel in Dover (call me old fashioned but I’m OK with maps and travelling sans sat nav) – waiting to head to yet another strange destination, but driving on the other side of the road - and keeping on it - whilst simultaneously searching for signs was beginning to be a bother as a lone parent with two kids in the car!  What. On Earth. Had. I. Done?

The eldest had chucked up on the first leg of our journey the previous day and we’d arrived requesting to use the washing machine before our hosts had even got the kettle on!  Fortunately, we were with the lovely Tania from Larger Family, who I’ve mentioned many times on here and for whom this was no trouble.  She and the 11 children she had at home gave us a stupendous welcome, a delicious lunch and a stonking good afternoon, so it turned out to be well worth doing our detour to visit them despite this little mis-hap!

It’s all too easy to judge a book by its cover and imagine she and her husband are a bit barking having such an enormous family, but they consider themselves nothing less than blessed and aren’t at all. Never before have I met such a well-mannered and beautifully behaved brood.  We came away feeling sorry to have missed their eldest two who were away at University and believing her argument for home schooling avoiding that ‘attitude’ the rest of us must often contend with.   There wasn’t even a sniff of it there – aside from what was displayed by my two, obviously.

Anyway, replete with home-made ciabatta bread, Bolognese and coffee and walnut cake we’d set off on the second leg happily, spent our first night away enjoyably and uneventfully and now, here we were  ready to embark on the third leg of our (mad) mini adventure abroad.

I wrote about our smooth and simple crossing, and how we lost the car on it because we played so much Uno that the colour and number of the deck on which we’d left it escaped me, but by the time we arrived in Dunkirk port and were no longer majorly mortified, I felt safe in the explicit learning of the road numbers for the route to our new Hotel and dis-embarked with confidence.  This, however, turned out to be a bit mis-placed!

We were excitedly driving along, with the children loving their encouraging new mantra of ‘Keep right, Mummy,’ when I noticed that the junction numbers were going in the wrong direction.  Which meant that is exactly what we were doing!  We’d come off the roundabout on the right road but at the exit for going the opposite way - something so easily done when you’re going backwards round them, innit?

And it had all been going so well for a millisecond.

Fortunately, the roads are fabulous, the signs are great (probably for all the numpty Brits fresh off the ferry) and the next turn off is never very far away.  It was easy to go back on ourselves, which transpired to be a good thing, as we would end up doing this a lot over the next few days.  However, seeing as we were on holiday and in no particular hurry, it didn’t really matter.  So what if we accidentally almost ended up in Belgium the following afternoon?! ;)

I popped on a brave face for the children and just got on with it.  More disturbing and further frazzling for my nerves were the juggernauts blasting past on what’s normally and inside lane, but in under ten minutes we had arrived at our Hotel.  Only to find it was closed.

With my French sorely tested we were let in via a virtual vending machine.  The place was tiny and akin to Woodchip Central, but it was cheap, near the dual carriage way, and we were -so far- unscathed, so were staying.

My plan to pick the brains of the Receptionists re where to go and what to do would have to wait though - until they were on duty later.  Instead, we grabbed some maps and skidaddled straight off to Dunkirk city centre.  The little one slept, so the eldest and I cruised the streets in the car, following the locals, getting used to entering roundabouts to the right and practising turning left (really, really weird).  The signs are still excellent and, as I found my French driving feet, some of the real dread started to dissipate.

Parking up, we aimed for the Office de Tourisme.  The staff were a bit snooty for my liking and the building was far posher than it has a right to be, but Dunkirk is full of beautiful and ancient architecture.  It’s a place of fascinating history, incredible, significant stories related to the war and the perfect place to explore on foot. 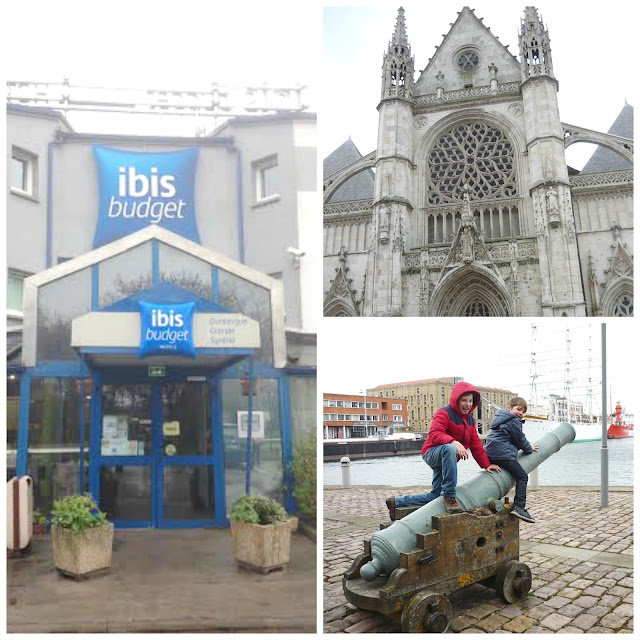 While we wandered and the kids climbed on the cannons, they demanded their dinner.  Little did we know that the restaurants wouldn’t open for another two hours!  The locals laughed at us and pointed us in the direction of fast food joints, but that was never gonna happen and the Tea Houses that were everywhere served only cake and coffee type stuff until 7pm.  We were struggling.  The boys needed something more substantial and I needed something stronger.

Eventually, however, we discovered a small bar / Pizzeria, the charm of which was helped by the Christmas songs that were playing, the wine that tasted of grapes (one of the main reasons for going to France) and the waiter – a bona fide Frenchman - reminding me what it feels like to be treated like I am the only woman in the world!

To boot, the pizza was the best we’ve ever had in our lives and we’ve been inspired to try re-create them at home ever since our return – just by buying ready-made bases and adding lashings of passata and grated mozzarella.  They’re not quite to the same standard but they’re a marked improvement on our usual ones!

We returned to our Hotel, content with our day and satisfied enough to cushion the shock of our room being the size of a small box and discovering our en-suite shower in a cupboard.  Let’s just say these things were off-set and easily redeemed by our visit to the local market the following morning!

This was wonderful – exceeding all my hopes and expectations – and is the other main reason I wanted to bring the children to France.  It, alone, would be enough to bring us back to stay in the Grande Synthe area again.  We had a proper mooch, picked up some stuff for supper – predictably a baguette and some cheeses – and a few items of clothing, the likes of which we only see flogged for a fortune in boutiques over here, before getting down to the serious business of the day – where to go for our long, European lunch. 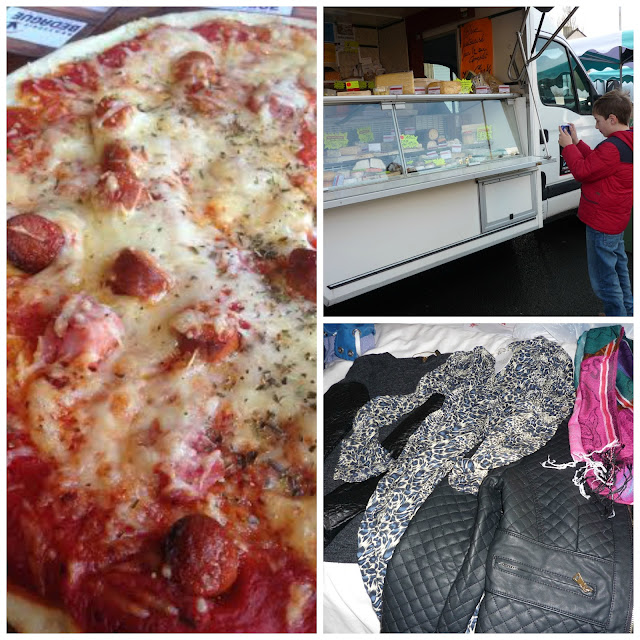 For this we decided to head back to Dunkirk, past the city centre and onto the amazing Malo les Bains seafront – a splendid setting, not yet fully open for the summer season, but with a few places from which to choose and I introduced the children to authentic yet informal French cuisine, plus their view of ‘working between meals.’  They liked this idea, stuffed their faces with fresh fish and chips, then ran off all their energy playing on Dunkirk's famous beaches. 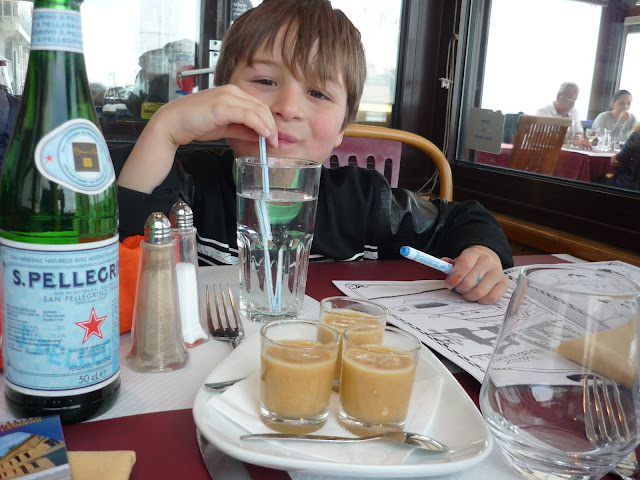 In the meanwhile, after chatting with a resident mum, I made a big decision.  Tomorrow, we were going to go to Belgium – and intentionally this time!  It’s only around ten kilometres up the road and it would be much more of a psychological challenge than a physical one.  I realised I had to have faith, believe we could do it and leave any lingering fear behind.  We’d need to get back to the port for our ferry home, but there was plenty of time and, what the heck, it would be fun to drive in three different countries on the same day!  Mad, but possible.  And I'm not saying any of it was easy - this kind of thing is hard - but so is being at home with two kids on your own during school holidays and it’s not difficult to work out which is preferable!

And we made it!  We went to Belgium for another spiffing lunch (that costs around half what it does in the UK) and it was a completely different experience to being only a short distance away in France. The language, the food and the surroundings were now distinctly Flemish.  We’d gone on to the second town over the boundary, Veurne, as we’d been advised and were really very glad to have done so.  It added a whole new dimension to our mini adventure abroad and I’d recommend doing something similar with all my heart if you get the opportunity. 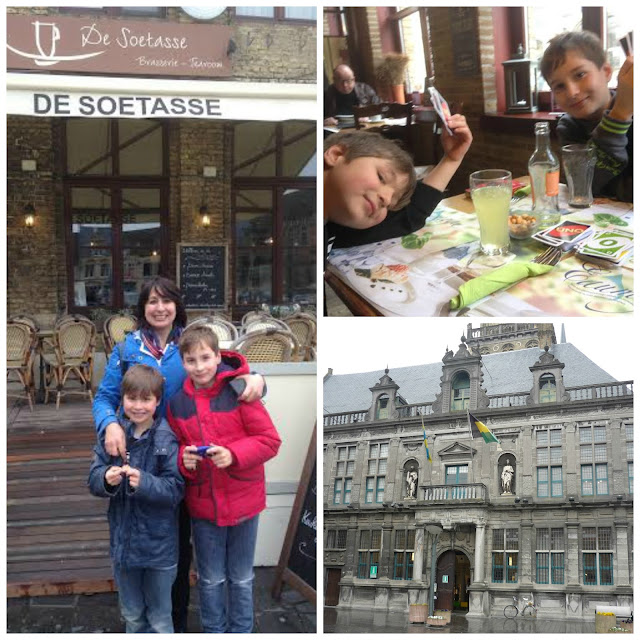 A surprisng number of people said they wouldn't entertain the idea of driving abroad, especially as a lone parent with two kids in the car, but please don’t let a lack of confidence or real dread be a deterrent. Even without a co-pilot or sat nav (although having either or both would be brilliant), things can sometimes go well for much more than a millisecond and even become enjoyable, so you, too, can triumph!
Posted by Older Single Mum at 13:33