Birth Story -Nothing Like it is on the Telly!

This is a post in response to Actually Mummy's Birth Story Linky.  It's one I wrote quite a few years ago for the local NCT magazine.  Nowadays, it would be much shorter, sharper, funnier and punchier, but this is how it was done then. The long-windedness of it all makes my point about the labour - that it's nothing like it seems to be on TV programmes - it can be very long indeed!  Since then, a baby brother has come along and I have divorced my husband.

LABOUR started approximately middle of May.  I wasn’t due until 26th.  It was nothing like it is on the telly.
First, it was like being hit by a bus.  Only a few weeks before I had been awoken with two such instances and then nothing until now.
Having experienced that jolt to reality, I was pretty sure that I wouldn’t fancy – or let alone be capable of – walking through hospital corridors to reach the correct ward when the time came, so we chose to try for a home birth.
This came as an unwelcome shock suggestion to my husband.  His previous birth experiences – with his wife no. 1 a long time ago – were very much so-called orthodox.
Being into Natural Medicine and the Healing Arts etc. I had other ideas, but, more importantly, my midwife had this obsession with sending me up to the Hospital every whipstitch along the way, apparently nothing to do with my age (41), but just ‘being careful’ and I had come to associate the place with stress.
Which wasn’t a good place to start, as far as I could see.
Living just up the road from there, we had, therefore gone with my instincts to at least begin from somewhere more comfortable but remain open minded regarding any sort of possible, necessary transfer.
Going against the grain has been the (accidental) form during my life, but it takes guts and determination nevertheless, especially when feeling vulnerable.
Anyway, there we were, tarpaulins on floor in living room and bedroom, and waiting.
Menstrual type cramps set in and I thought it would all be over – just like it is on the telly – within hours, however days passed by.
We watched films, ate things like fish and chips, generally lazed about and rested while nothing progressed or eased.  It was quite peculiar.
I meditated and, deep within, found a reluctance to let go of my pregnancy.  It had been the happiest time of my life.  At my age I was lucky to fall at all and having two previous miscarriages had made the time rather more anxious than we would have liked, but here we were now. 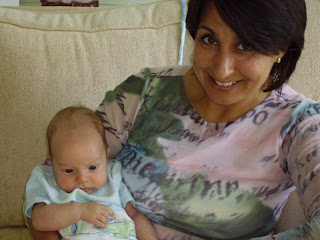 A full moon came and went – a time when there is a steep rise in the number of births and that bus came and did a proper job again, but briefly only and the waiting continued.  To my husband’s delight, Arsenal won the FA cup and we watched the Eurovision song contest, not going anywhere and the rather uncomfortable cramps continuing.
Monday 23rd May brought a whole new dimension.  My hip bones felt wider and were still shifting.  There had also been a sort of fluttering feeling and a sensation I believed to be a spirit entering.  Yes.  It continued to be still rather peculiar all round, unexpectedly so.
Downstairs, it felt inside out.  Gentle contractions started down my right leg and we wondered when it would be time.
Wednesday morning brought a graceful gush of water – a day before my due date.  Again, this was gentle and nothing like the big dramas we witness on the TV and no rush to Hospital either.  We went for a walk in the evening to try to bring things on.  It wasn’t easy, but we were determined not to be induced and thought it might help.
Should real labour not kick in within the following 24 hours of my waters breaking, we were told infection might set in and we would have ended up where we didn’t wish to begin and wanted to avoid the palaver and the danger.
Around dawn that bus just kept on coming from every conceivable direction.  No-one is able to tell you exactly what to expect or what it is like as it’s different for everybody.  It was petrifying and I threw up three times throughout it all.  ‘Kicking in’ is how I would be able to describe the entire process and, to this day, wish I’d been much better prepared. 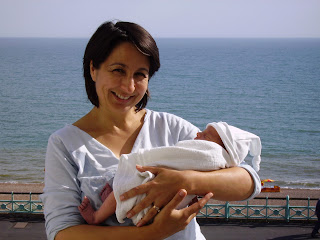 There is plenty of talk on pain control, but not quite why, why, why or how, how, how it truly can be.  People try to protect us or we choose not to listen and think it will be different for us, but 14 hours of being hit by said bus produced the result we had all been craving – a beautiful and perfect baby boy, having been able to stay home for it all.  I was glad for my hopeful insistence on a midwife who had actually given birth, which proved both beneficial and insightful, as we felt we had been patronised to death by well meaning others.

Like the old wives say, the road to Hell is paved with good intentions and I felt I was already there, so needed something more solid, focused and real, not someone feigning empathy whilst mindfully looking at their watch for when their shift would be over.  I put this down to my age.
Our midwife, Pip, was a Godsend.  Her shift began in the early morning.  The contractions were well underway by then.  It was impossible, I found, to stand or eat.  She checked me over and returned – in response to my begging – by .  A friend came shortly afterwards and with my husband, they got me through it all.
It was shattering and quite shocking.  The main thing was feeling desperate for a poo and being unable to go.  ‘Surfing’ the waves of pain might work for some, but not for me.  I lost control and surrendered to my body’s instincts, lay on my side and tried to  trust it.  I was snoring between contractions, I was advised afterwards and to use the very powerful energy for the baby.  Everything I had planned including yoga and  affirmations about patience went as far out the window as one could ever possibly see.  It was all too much of a struggle.
I managed to beg for any pain relief, but the gas and air had remained in the car ‘for later.’  There is nothing else.  It is a routine home birth. 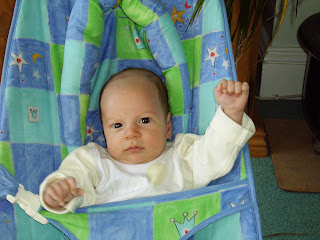 I felt I would obviously die before then, that it would be impossible to make it!
My Healing work was not enough.  ‘Breathing’ him out just did not seem to work, so I let go, eventually, swearing and pushing, like the best of them.
Feelings of desperation and panic attacks ensued.  Also, I kept waking up for weeks afterwards thinking I was still in labour and was assured this is common, but once Pip said she would have to hand over to someone else shortly and it sunk in, a miracle happened.  Something else took over and things took on a whole new hold very quickly from then on.  It was a mental switch that meant we were enabled to swiftly get on with the job in hand at that point.  There was hardly even enough time to call in the second midwife, who comes as a matter of course with a home delivery.
I thought, wrongly, it was all over by the time our healthy and patient son, Robson Ian, finally came tumbling into the world, gently somersaulting into the lovely midwife’s  very capable arms – someone who had not left my side virtually most of the day.  He arrived exactly on his due date and we were very proud.
This was all keenly observed by my (then) supportive and emotional husband, who could see from his position on the bed - as I hung on to him from my all fours on the floor - in a specially placed rear view mirror of ours, so kindly – or unkindly, depending whose view taken – turned to him by Pip, which, despite everything, I’d  had the presence of mind to quite deliberately avoid when the hour came!  Thankfully it would remain out of my notice or it could have been totally inhibiting.
The contractions would continue for almost a complete hour, until the placenta eventually followed.  It was still agony.  I was crying with relief.  Euphoria would come much later on.
There were no stitches and no heartbeat problems whatsoever indicated at any time throughout the whole birth ordeal – not for the baby anyhow and he wasn’t the only one who demanded food now!  Lying on my side to breastfeed was the only option as I couldn’t sit comfortably and wouldn’t be able to for a good few days yet.  This was kindly shown by the second midwife.
A friend who'd been lodging with us was dispatched to get champagne and a take-away and another friend had arrived to help.  We all celebrated.  It was like a mini party, but, before long, that, too, would be over.  I found myself unable to eat, despite being ravenous, but managed some liquid pretty readily!  The baby dozed throughout it all, no doubt too exhausted to join in the fun.  I gingerly stepped in to the bath then curled up with my husband, both of us too excited to sleep a wink all night.
It was nothing like it is on the telly. 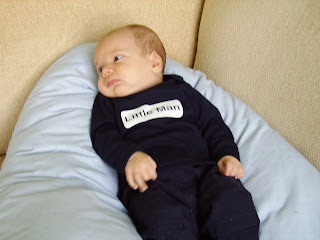