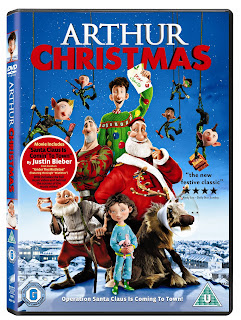 'By buying this DVD you're supporting the British Television and Film Industry.'

It begins with a little girl from Cornwall writing to Santa, asking him all the questions all our kids need answers to and then shows us his rather too-marvellously- modern military style operation which explains it all.

Only Santa Claus, is getting a bit long in the tooth for PINs and stuff, so it's run slickly by his autocratic eldest son, Steve. Think Army combats on a million elves, an awesome Spaceship for a sleigh - 'S1!' - and a meticulous, mighty 'drop plan.'

When the boys and girls are scanned to see what percentage nice vs. naughty they are, my two scoundrels sat up a bit!

There's 'Operation Santa Claus' and 'Mission Control.'  And there's the younger brother called Arthur, with his rather more caring 'Christmas is about special magic' approach.  Now think a klutzy character like Ross Geller in 'Friends' and add a diabolical laugh.

This is a charming animation film, bang up to date, with 'fancy pants technology ' according to 136 year old retired Grandsanta, by which he means Satellite Navigation and tablet computers, despite which the present due for the child at the outset of this uproarious adventure has accidentally been mis-laid.

It takes old fashioned feelings to want to avoid the scary scenario of her not having anything to open on Christmas morning, so it's down to Arthur and his honestly hilarious Grandsanta to correct the blunder in time.  They're played / voiced by James McAvoy and Bill Nighy - who refers to his Reindeer as 'A bag of fleas' and some other animals they encounter as 'Mangy morons.'  I laughed out loud as much as my children did.

But, can they do it?  It's not 'the same old world' it was.  There are skyscrapers, aeroplanes, 'globular warming' and guns now!

Santa is played by Jim Broadbent and Hugh Laurie is the sophisticated Steve.  The lovely Ashley Jensen from Extras also stars.

If you like a feel good, family film about Father Christmas, then you'll enjoy this one. I can just hear Arthur laughing like a drain right now!


Arthur Christmas is out now on Blu-ray 3D, Blu-ray and DVD from Sony Pictures Home Entertainment.

Disclosure -  I was sent this DVD for the purpose of a review, but all words and opinions are my own.