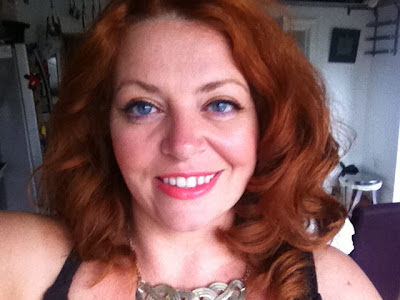 Kicking off Series Two of Single Mums' Stories, this is the utterly fabulous Kate Sutton, age 42.  She famously blogs at WitWitWoo  ['Lifestyle. Family. Hairdye!']  She is one of the funniest, friendly and most helpful Bloggers I have met.
She started blogging in 2010 after graduating, just missing a First in English and American Literature with Creative Writing.  She 'needed a space to write.'  That 'space' is currently being peppered with outrageous, well written and hilarious accounts of her new found 'Dating' status, leaving us all begging for more.

Here, though, she makes the point remarkably well, that many of us find ourselves in a positions that we don't choose to.
She lives in Rainham, Kent and works for a marketing agency, primarily involved with Social
Media campaigns, which plays right to her strengths.


Kate has two sons, Ben 17 and Dexter, 8.
Lovely Anya from Older single Mum blog has asked me to contribute to her series of blog posts about being a single mum, challenging the perception that single mums are predominantly young, uneducated and living on Council estates.


I am neither young (unfortunately,) nor uneducated (thankfully,) nor do I live on a Council estate (for now,) but boy, am I very much a single mum.


This isn’t the first time I’ve been a single mum – last time round, however, I was in my late 20’s and, after picking myself up from a massive confidence blow, I coped.  Just.  I worked full time in London and found myself literally running from childminder-to-train-to-work-to-childminder-to-home … every day.


It was, and remains, exhausting, because for the second time round, I am doing it all over again.  I have chosen to work full time and am lucky enough to have a job I love, but I still run from home-to-childminder-to-job-to-childminder-to-home … every day.


I’m now in my early 40’s and I haven’t really felt negatively ‘labelled’ as a single mum but then it’s only been six months.  Plus, I have my own home, job, car … I’m absolutely skint mind you, but, on the surface, I’m doing ‘ok.’  What people fail to realise is the story behind why I’m a single parent.  What drove me to make that decision?  Did I just decide one day that I could do a better job on my own?  That life would be easier if I ‘got rid’?


Well, in many respects, yes, I guess that’s all true.  But when your hand is forced, sometimes there is only one decision that can be made.  There is no choice.  I had no choice.  And we all have to live with the consequences.


Being educated, older and living in a nice neighbourhood doesn’t necessarily make being a single parent any easier – we all have our own stories as to why we’re in this situation.  Very few parents choose to raise their children on their own.  Ask them.


And for those women who do fall into the stereotype, I applaud you, because I know how hard it is.


I work very hard to provide for my children because that’s how I was raised, but after I graduated as a mature student in 2010, I found out that providing was going to be harder than I’d anticipated.  It took me two years to find full time employment and Dexter and I have to deal with the fact that I’m just not around much.  Just like my eldest did first time around.  But what other choice do I have when I’m the sole provider?


I can’t give up on working because what I’ve realised about myself, having been in many a crappy situation over the years, is that I’m ambitious as hell … bloody determined, and I have a stubborn will to succeed.  Traits that hopefully both my sons have inherited.

Because living in today’s world is HARD - whether you’re a man, woman, single parent, a couple, gay, straight, black or white.  It’s just hard.  And I refuse to let my ‘situation’ hold me back.


But that’s just me.