When the Going gets Tough - the Tough go Shopping!

[Proud to be in partnership with John Lewis - I have arrived!].

We're on overload here.  Some new Foreign Language students and re-arranging a few rooms to make it possible, plus all the upheaval that entails, pushes me straight over into full immersion level in it.

It began with new beds for the children - their others were only meant to be temporary, but we know how many years that can go on for unchecked, then emptying what was their play room and all the palaver that comes with that - finding other places for everything to go as well as shifting all the alphabet and number posters, pictures, toys and stuff, followed by moving my long standing student to a different room and unexpectedly taking in the two 'emergency' ones while we're still in a mess.

I felt obliged to dash her innocence and explain that might not necessarily preclude any hanky panky and pointed out that it was otherwise odd.

It turns out they're married accountants on an extended honeymoon and not remotely related, so perhaps it isn't so peculiar after all.

I swear the stress will kill me.

But hey ho, we're a full house now, there isn't a chance of dying alone!

Yet there is still just the small matter of where any friends might stay.  Not just the childrens' but my own - because they might not fancy the air beds.  We're all getting a bit creaky for that malarchy.

I need one of these sofabeds because they're perfect for sleep overs for people my age! 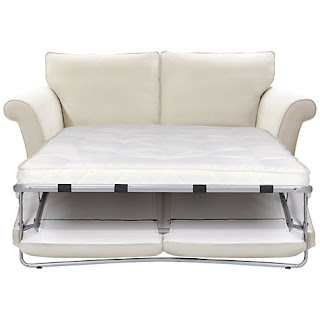 But do we need it in cream?  It's a toss up between this one and the duck egg blue for which is the loveliest, but, really, surely the stress of keeping such awesome gorgeousness spotless would prove too much?  We do not need overload overkill methinks!
Posted by Older Single Mum at 11:54