How Not to Make Fajitas but How to Drink Tequila - by my Venezuelan Students.

Gallivanting as one does, it's necessary to cater for the resident Foreign Language students before I go anywhere.  They like their own food, naturally, so it suits us all if they have the ingredients in the fridge to do with as they please whilst we're away for the occasional night or two.

So when it came to the married Venezuelans (that weren't 24 year old cousins who wanted to share a room, as the school had said they were!) I bought them everything they needed to make Fajitas - or so I thought:  Chicken, peppers, onions, wraps and those trays of salsa, guacamole and sour cream.

When most of the stuff was still there on our return, Mrs. V told me that she had made a salad instead.  She was a bit shifty and I was a bit curious, but couldn't really have cared less because it was such a relief to have had a bit of a break from everything!  To use it up though, I bought some more ingredients and asked her to show me how it's done in her country and she very graciously taught me how it isn't:

They use minced beef only - fried with no fat.

They use green peppers only - cooked in butter and garlic - not oil.


They don't use trays of ready made stuff, but fresh avocado and home-made tomato and onion salad, which means cutting them up really small and adding garlic, oil and vinegar.  They call it 'Pico Gallo' - pronounced Pico Gajjo.  And they make sour cream with mayo, coriander and what they call lemons, but we call limes.  This caused even further consternation all round!


They eat fajitas for lunch, not in the evening and usually only at week ends, not during the week. No prizes for guessing what time of day this was or which days it wasn't. 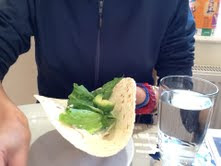 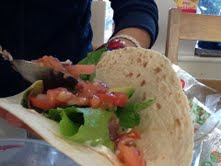 But because it was the evening. we managed to stick with some tradition by washing them down with a little Tequila.

Good Tequila should be 'blonde,' not clear and it is drunk out of shot glasses in Venezeula.  In Mexico they call these special glasses 'Caballito' - which means 'Little Horse.'

It's not done to get drunk - they will only ever have two shots at a time - to be 'happy.'  It's their culture to stop drinking alcohol at 'happy.'  They wouldn't dream of drinking it before parties - parties are for drinking - but beer on the beach is ok!

They say Cheers with 'Salut' and raise their glasses with their left hand, meaning they will drink again.  If they drink with their right hand, it means they will only partake of one which will offend!

They may have shown me how not to make fajitas, but they showed me the right way to drink Tequila.