My Most Perfect #Parenting Moment Ever.

We're quite lucky with our local leisure centre - they lay on all sorts of stuff for the kids throughout the holidays for just a couple of quid at a time because they're non-profit making.  Unheard of as this is, it doesn't mean we wouldn't take advantage of it, does it?

The boys have been learning to rollerskate / 'Blade' and, among other things, to play table tennis which might not sound too glamorous, but there are tables dotted all over Brighton for free playing on them and this will have saved no end of arguments over the rights and wrongs between us all, bringing about a great deal more joy than strife from now on!

But by far the best thing to come out of them thoroughly exhausting me this lovely break was something we did quite independently and is something on which my heart has been set for some years.

One of my greatest sources of shame as a single parent (and there aren't many!) has been not being able to teach the boys to swim properly, because coaching them individually has been out of the question with two such young children.

The eldest had lessons but they became an ordeal when he had an 'incident' and lost his confidence, which we tried to push through but eventually gave up on, because I was pregnant with littlest, had kicked my husband out and neither of us needed any more sources of stress.

Further lessons have been sporadic in line with finances, but we have enjoyed plenty of play sessions in pools nevertheless with the baby / toddler / pre-schooler who is fearless to the point of dangerous.  It became imperative he also learned to swim because, unaware that it was entirely down to his special floatie swimsuit, he thought he could and acted accordingly, so I booked him half a dozen aid-free lessons.

The small pool has served us all well which is where we stay, so the eldest rarely gets to practise lots of complete lengths, which would undoubtedly stand him in better stead for his friends' pool parties now he's at that age, but it's great he's itching to do it, considering his fear's been so long lasting - and that's where we were recently when my most perfect #parenting moment ever occurred.

Littlest hurled himself into the water towards his brother, never bothered to come up for air and swam underwater a good few feet all the way to him!  Just like that.  Two lessons was all it had taken for him to figure out what he was doing.

So thrilled were we all that he repeatedly did this for the rest of our time there that day - only ever to his brother - his true inspiration.

I *might* have laughed and cried with joy.  We *might* have a long way to go until we're all able to swim a
decent distance together.  The youngest learning to breathe so he can keep going *might* be useful before we try.  But we've had a breakthrough.

And the best bit of all?  The brotherly love and devotion the eldest demonstrated as he encouraged him over and over again, oblivious to how this might give him what he wants and deserves - for us to be able to properly swim together.

He knows I went with my dad when I was young, which would give me the 'nice, funny feeling' he said he had in his tummy on the one occasion when we have managed it (by dragging a friend along without any of their own kids to care for!).

He doesn't know it was the only night of the week we might have seen our dad and that he was training with his scuba diving club really, that he would actually only do a few token lengths with me and my sister before abandoning us altogether to do a load more on our own and then, in case we didn't get the message, which we didn't because we were just children, he'd leave us in the back of his Landrover in the pub car park afterwards, together with his new wife's children and a bottle of lemonade and a packet of crisps each for the rest of the evening!

But it's why my swimming is good and I want my boys to be able to enjoy theirs and when you look at my patchy teaching methods - basically persistence and patience - and how handsomely they've paid off, there really is nothing to feel ashamed of.  Being a single parent sometimes means being doubly proud.

Just look at this little beast in all his glory! 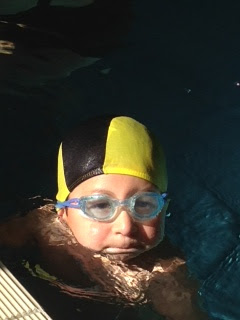