'Hedwig from Harry Potter' they said.

'Was that Robbie Coltrane?'  I thought.  'Why would he be at the Britmums Live conference?'

Cue a further ton of *squealing* on Twitter.  'A tad too delighted, to be honest,' I thought.

Curious now, continuing to watch my timeline for more clues, I eventually summoned the Awesome Eight Year Old for enlightenment.  He would know.  He's always ploughing his way through one volume or another.

Bless him, he didn't roll his eyes, but he did laugh:

'Hedwig, Mummy, is Harry Potter's owl, you know his very own one.  Robbie Coltrane is the half-giant called Hadrig!'

'So he's what all the fuss is about,' said I, proudly telling him of the big announcement just made, that the real said, actual, owl would be where I was to shortly be going.

Anyhow, fast forward several weeks and Heaven knows how, possibly because of previous mentions of his love of the books, we were very luckily invited to go on the Making of Harry Potter Studios Tour.

This is the Holy Grail of Blogger Land and although I'd paid the Warner Bros Lounge a visit whilst working at the conference, having had to bail out early because of my concussion problems had meant missing the whole Harry Potter afternoon, Hedwig and all, so I was really none the wiser about who, what, where etc., but knew my children would love to go.

This meant one thing during the summer holidays - back to back watching of all the movies in the weeks leading up to our trip.

This led to another - becoming a big fan.

And also another - gaining an inkling of comprehension as to why the series has become the phenomenal success that  it is worldwide.

[The kids only watched the first couple.  The others really are quite scary - more so than the original reads, it would appear.  Our Foreign Language Students had already seen them all but wanted to watch them again with me and they were from Korea, Turkey and Columbia - proof indeed of Harry Potter's universal appeal!].

Here's an example of how they made some of the flying broomstick sequences and about two minutes in, you can see one of the highlights of my son's life as he rides one for himself!

Isn't that truly magical?  We took a friend and her daughter with us who said that flying over Hogwart's was the most amazing part of the day for her too.  We had the option to buy the individual videos they make as extras, along with a couple of photos, but this is the only area that they request you don't take any of your own.  Otherwise you're free to take as many or much as you like and there is Wifi as you go around for messaging / instagramming.

Also, as diehard fans of the series, our friends said they'd had to hold back their emotions as they entered the Great Hall.  It's certainly impressive and the details on every single artefact are unbelievable - check out Dumbledore's Owl Podium covered in real gold and the House Point counter behind Professor Snape and Hadrig!  The ceiling is the only indication you're on a film set:


The official guidebook gives plenty of insider tips and info, adding another dimension to the visit, but with the Fearsome Four Year Old on the loose, it didn't get looked at properly until we were home, which was a shame.  We'd also paid extra for the digital guides with earphones which are narrated by the man who played Drayco Malfoy (Tom Felton) which, again, gives lots more juicy gossip about the stars and how some things were done, but they were wasted on us, not just with young children to keep close, but with wanting to give avid attention to the film clips and interviews that are shown as you tour round, so we had to abandon those.

Overall, the whole experience is extraordinarily touching.  There is no let up on intricacy throughout it - from the original clothes - their teeny tinyness reminding us that the cast were children when they first endeared themselves to us - although Helena Bonham Carter's Bellatrix Lestrange's stuff was almost as equally petite (!) -

to the character paintings that came to life - 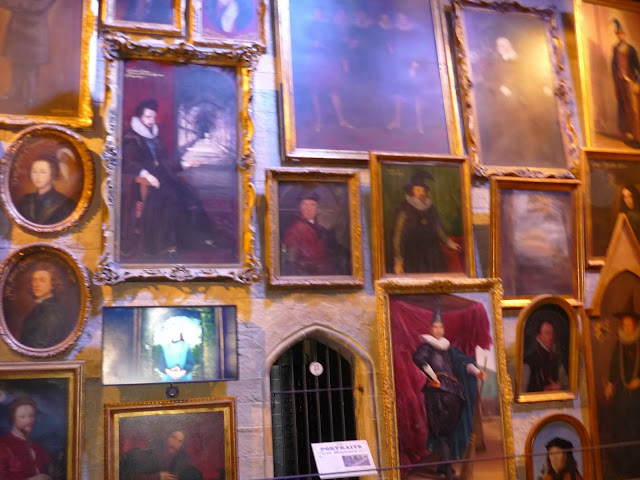 - and the amusing self-stirring pot in what seemed like a proper Potions Room:

But these were my very favourite things of all -

Everyone's wands.  They are mesmerising.  Each is unique - imaginatively and exquisitely different to the next - and I couldn't spend long enough poring over them.  For me, they alone are worth the journey to the outskirts of North London.

We were fortunate enough to be given one each for the children on our arrival and they have never received a more popular present.  Balk as one might at the £25 ish price tag on those for sale in the obligatory foyer Gift Shop - where you can explore them to your heart's content if unhindered by over-exuberant little ones and you don't mind the eagle eyes of the ever present security guard scrutinising your every move - they were a real thrill throughout the entire tour, particularly for the Wand Combat lessons and have been played with every single day since our visit, so it's certainly possible to get your money's worth.

You get to see the inside of the boys' dormitory, the Gryffindor Common Room, Dumbledore's Office - with that beautiful Memory Cabinet (filled with more 800 handmade and hand-labelled vials) and The Burrow, as well as Hagrid's hut, all of which are surprisingly small and in an easily do-able space.

There are also *gasp* the actual Horcruxes:-

...as well as the 'Marauder's Map' and the Invisibility Cloak, plus, probably, anything else you can possibly think of and then some!

By this time, we'd all earned ourselves some (non-alcoholic) 'Butter Beer,' which is available as soon as you move outside to The Backlot and if you're able to stomach the £3.00 per small cup, it is rather delicious.  It reminded me of old fashioned Cream Soda and was worth the wait  - I figured everyone raves about it for a reason.

This is where the exterior sets for the film production are - on what used to be a local airfield and runway.  The inside had previously been hangars and a factory that was a production centre for Rolls Royce aircraft engines, but, also, prior to this, during World War II, the plant produced fighter planes for the MoD.  Suffice to say, despite the tremendous transformations, it hasn't stopped making history!

Here you'll find, for example, the set for the houses on Privet Drive, the famous blue Ford Anglia car, the tall and thin purple Knight Bus, the enormous Chess pieces (larger than lifesize) and the only single section of Hogwarts Bridge that was built - because Visual Effects Department did the rest - and the heathens among us, who are yet to become aficionados of the books are advised that it wasn't even in the original novel or script, but was created for Harry Potter and the Prisoner of Azkaban and kept in.  I guess there's nothing wrong with such artistic licence when something lends itself so well to it - and it's snippets like these that just keep coming.

The staff know everything, by the way.  Every member exudes enthusiasm, an abundance of knowledge and glee.  They invite you to challenge them and undoubtedly add to the joy of the tour.

Speaking of Special Effects though we whizzed into The Creature Shop - to gawp at the models, masks, make up, prosthetics and machines used to create goblins, elves and a variety of animals and er, creatures, again with revealing insights given in short, fascinating film clips, but the youngest had had enough by now and we were soon dragged for a stroll down the actual Diagon Alley.  Not, however, before I'd managed to make this acquaintance.  Let me introduce you to (a stunt double for the real) Hedwig!

Because we'd dragged our feet well over our recommended three hour slot - and obviously weren't the only ones to do so - this was quite crowded by now, so we didn't get to see it in its full glory.  It's still very exciting to be there at all though.  It's like a real High Street - albeit an old fashioned, wonderfully weird one - with the actual Gringott's Bank, Ollivanders Wand Shop and Weasley's Wizard Wheezes weaving themselves a slightly further into our souls.  There are a few photos on my Facebook wall plus there is a Linky at the end of this post where Bloggers have added theirs - and they are brilliant!

And then - La Piece de Resistance:

The longer you linger here, the more the light changes - through a 24 hour cycle every 15 minutes or so.   It's simply breathtaking - and you don't need me to tell you it's the actual one, do you?  But you might appreciate me mentioning that this splendid School of Witchcraft and Wizardry will shortly be undergoing a special festive make-over called 'Hogwart's in the Snow'  which will run from 5th November - 6th January and the Great Hall and other some of the other sets will be dressed with the actual Christmas decorations and food props as seen in the films, and that it will be stunning and deserve a visit.

N.B. Tickets must always be pre-booked and cannot ever be bought there at all.

Seeing as the studios only opened last year, the tour has done incredibly well to recently achieve the Best UK Attraction for Children Award from Group Leisure Magazine, seeing off all the usual contenders and it has almost 100% TripAdvisor review ratings of Excellent or Very Good, which we wouldn't dispute, seeing as our day declared me completely redeemed from dim-wittedness.

Indeed, it was a huge #MumTriumph.

If only we could have flown some of those broomsticks home at the end of it all....!

Disclosures - We were guests of Warner Bros, given our tickets, a guidebook and wands for the children, but paid all our own other expenses.  We travelled to and from Watford Junction train station where frequent shuttle buses run to and from the studios at a cost of £2 return per person.  This is awfully convenient.

Five large photos and two videos were £61.00 between us.  Slightly steep, but glad we got them - a bit like the Butter Beer.

All words and opinions are my own obvs.