Sometimes I begin a blog post and it never sees the light of day.  This is because, just as in 'real life,' as we're all aware, conversations are started but almost impossible to finish with two young children around.  Throw in a Foreign Language Student who *shock* actually wants to practise his English with me whenever he can and even more moments will pass and lots of stuff on lots of levels will be abandoned.

This is not necessarily a bad thing.  The students can make my life a living hell when they're inconsiderate and party all the time, so it's a refreshing change to be treated like a human being and not someone here just to do their washing and change their sheets and feed them when they deign to turn up.  Every now and then we get one who is actually interested in the family, integrating and not treating the place like a Hotel.  They're in a no-win situation really as I'll moan when they do and I'll moan when they don't (to myself), as any free time it's possible to muster when the kids are in bed disappears into the night with them.

It's been quite challenging amusing interesting, however, explaining #TheApprentice and #I'maCeleb to a 41 year old man whose English isn't quite up to translating that yet.  Seeing as he's from Libya, my opinion about the Mel vs. Edwina argument - 'Nothing wrong with independence' (Mel Sykes) vs. 'Without a bloke she'll end up a bitter old woman' (Edwina Currie) would have been too exhausting to try to chat about and completely wasted on someone who can have four wives if he wants to.  And I never got chance to bring it up on the blog where, for the record, I was going to suggest that Edwina seems the far happier woman. #Justsaying.

Plus I was going to chat about how I hoped that cuckoo Kendra woman paid tax on the $500 000 she boasted about earning in the six months she claimed to be a stripper.  Before she went up in the world to and of prostituion - which is what living at the Playboy mansion involves.  Apparently, the old man (83 at the time), calls you upstairs when it's you he fancies.  She had no qualms in admitting that she slept with him (plus I bet she wasn't saying her incredibly annyoing 'OMG' every five seconds then;) ).  And the lovely Libyan and I didn't get very far with that convo either.  He comes from a mainly Muslim country where women's elbows and ankles must be covered, so it was a tad too embarassing!

Anyway, moving swiftly on, my ancient but amazing runaround has had a new clutch probably double the worth of the car itself and I've recently found myself in the peculiar position of reading a book that didn't seem anywhere near as good as the film that inspired me to borrow it from the library. Everyone knows the rule generally goes the other way and, despite keeping reading and hoping, it never happened.  And it's huge, so there's many an hour of my life I'll never get back.  If you get the chance, though, I recommend 'Philomena' - a great movie based on a true story.  The book is completely different and left me a bit meh.

The other night was far more entertaining.  The eldest was in a Christmas Concert at the esteemed Brighton Centre.  There were over 40 schools performing altogether and it was a charming event, made all the more challenging amusing interesting by my companion, the youngest, who had virtually stripped off in the heat of the place and was making those farting sounds with one hand under his armpit and moving his elbow up and down sharply, perfectly in time to Ding Dong Merrily on High. 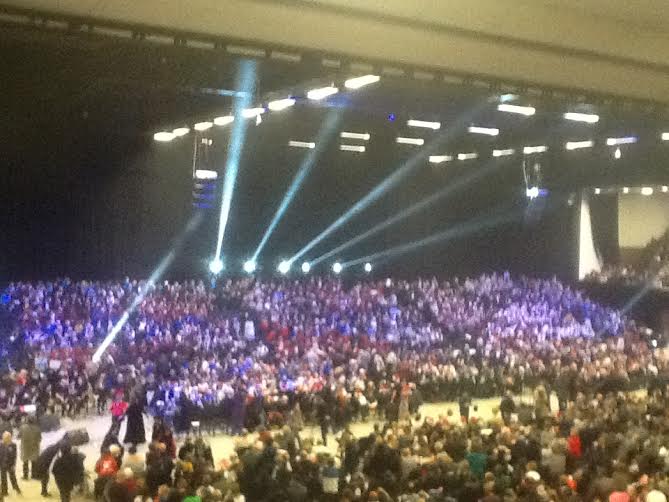 This would be inbetween him alternating trying to sleep on the floor because it was well past his bedtime and standing up attempting to out-sing the whole lot of them without really knowing all of the words or tunes to any of the songs.  He has no shame that child.  I pretended not to notice those knowing looks passing between the poor people who were unfortunately seated within earshot.

But as if my perpetual humilation wasn't enough, I found myself faffing about with all our layers afterwards - coats, scarves and gloves everywhere, with both their little boy woolly hats perched temporarily on my head in an effort not to lose anything, just as the first man I've fancied in a few years came by to say Hi.

I guess some things are better not said or done!

What have you been up to?
Posted by Older Single Mum at 13:46