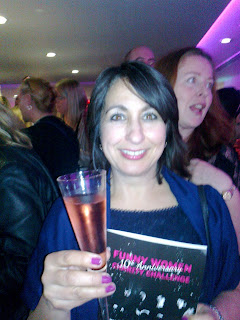 This is me being wined and dined by Funny Women, a couple of hours before crashing out on the train home, fast asleep in my finery (jaw undoubtedly vastly ajar), completely crippled by my high heels.

Funny Women is an organization which has successfully set out to be the vanguard that finds, nurtures, develops and promotes female comedy talent.

I won tickets on Twitter last year to attend this event - a Charity Challenge to celebrate their tenth anniversary of being in business.  It was also International Women's Day, so it seemed necessary to take a female drinking partner companion!

Founder, Lynne Parker believes women's humour to be powerful, empathetic and strong and these ladies put on a show that gave credit to her adage.  It was full of the passion and fun she advocates.

Yet the these weren't women who had necessarily come through the ranks of the FWs famous workshops or training programmes, as the whole point of these particular 'stand-ups' was to drag them all out of their business and broadcasting comfort zone backgrounds, in order to raise money for their individual good causes by doing their slick and hilarious routines.


Each was nervous, but the atmosphere was warm and supportive, hosted perfectly by the charming and down to earth Kate Garraway, who my friend and I had a good chat with as we all queued for the loos!  Although she is a big name in television, she's only 5'1 bar her funky ankle boots.  My shoes had been rendered under the table where they sat all night, so painful were my poor feet, long unused as they are to being adorned by anything unfit for the school run.  Kate had the good grace to pretend not to notice, plus, being such a pro, she made it to the 'Sofa' in the early hours of the morning for her day job!
Videos of the acts are HERE.

Deb O'Leary, President of the British Association of Women Entrepreneurs, opened up regaling us with secrets of her 30 year marriage.  Amisha Ghadiali, a leading force in responsible fashion, had us all in stitches with her entire set revolving around using Twitter, including how she couldn't use her own name because someone (who never Tweets) already had it and she couldn't use @AmishaG because of what it spells...


Vanessa Valley and Sharon Simpson told jokes about all sorts of relationships which we all identified with and Charlie Webster, Sky Sports Presenter and genuine amateur Boxer, followed them confessing that her brother had told her she could just fart to be funny.

Then came the 'Nuns' and an extremely young and talented Geordie geek, Dr Julie Greensmith who's 'more about Why Ipod and Why Iphone than Why Aye Pet.'

Last was the wonderful Carole Stone, Chairman of YouGovStone and former producer of Radio 4's Any Questions - with self-deprecation galore about  her combination of a having a flat chest and a nose that 'could kill a man!'

The evening was set off with a variety of superb Mezze and other entertainment, including a spiffing 'Four Femmes on the Thames' quartet, (after their quaint and clever balloon making) and an American style raffle.  All the details are HERE - the charities supported (still welcoming donations), plus the incredible credentials of each performer.

But do check out more footage of the evening on the FunnyWomen YouTube channel - it's simply too good to miss.

At least the only thing you can be completely crippled by is laughter!
Posted by Older Single Mum at 11:51