Many years ago, when I was still young and stupid naive, it seemed a great idea to go to a Fancy Dress party dressed as Noddy.  Heaven only knows why and I still cringe when anyone moots or mentions the F words, because, on my arrival, it came as a complete shock to see all the other girls / women as glamorous as could be, dressed and made up beautifully and in the most sophisticated manner, having come as princesses or the like.  I felt an utter fool, unattractive and ridiculous.

So when Brighton Bloggers were forming plans for our leg of the non-motorised Team Honk Bloggers Relay in aid of Sport Relief  and said they intended to dress up, it gave me nothing short of the heebie jeebies.

My friend Superlucky Di said she was doing her bit as a Ninja unless I wanted to go as a pantomime horse with her? Er, that'll be a no, thank you very much.

Then Maddie from Gammon & Chips and Sarah from a field somewhere said they'd do their bit on scooters in animal onesies.

That'll be a 'No,' too.  Ta anyway.  *remembers red pedal pushers and blue hat with a bell on and shivers*

Then Jokers Masquerade offered me a free sort of super sexy Alice in Wonderland outfit which I must admit made me feel a bit old but less idiotic and, as it was for a good cause, I'm not so averse to making a fool of myself if it's an actual plan.

- who'd picked it up from said loonies lovelies further along the coast. 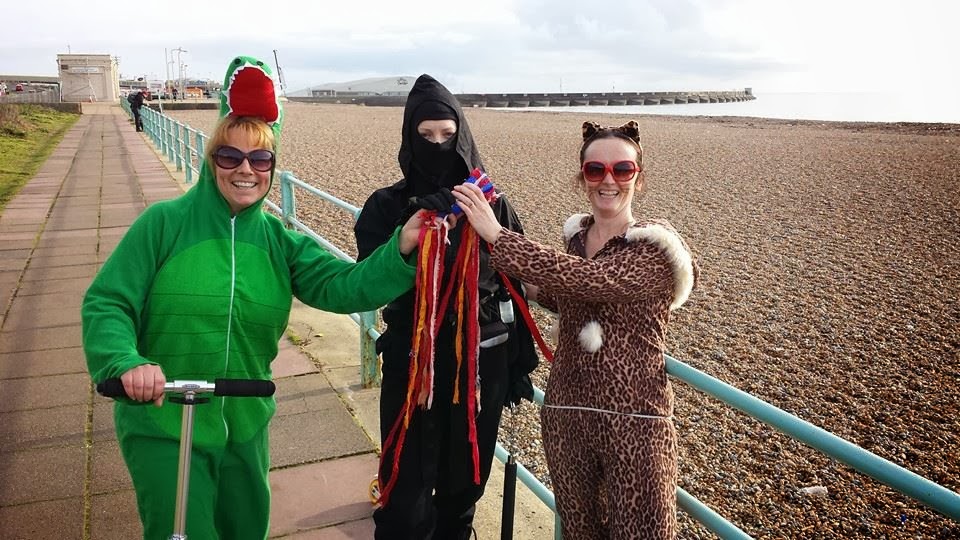 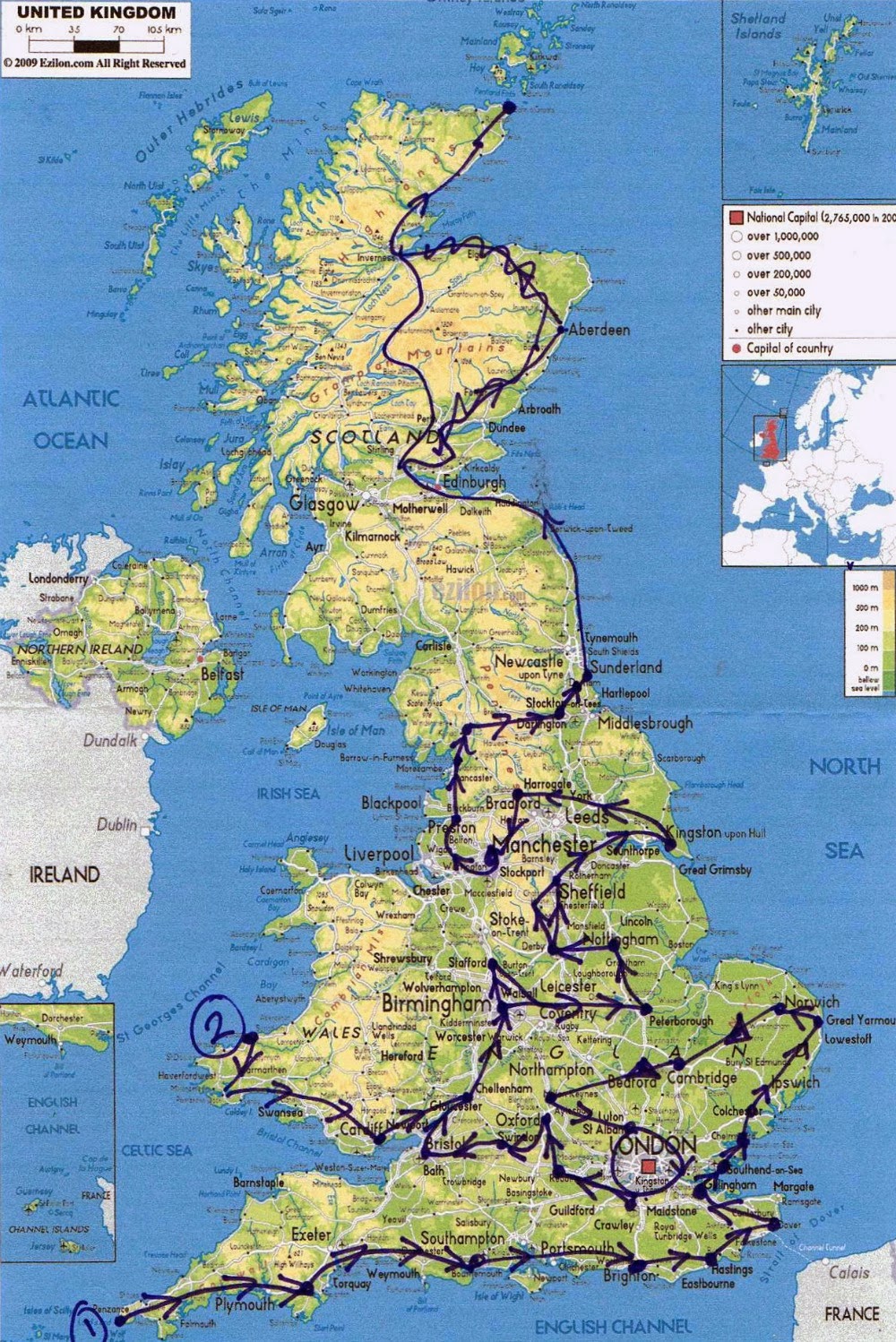 This is the relay route the baton is taking - all the way from Land's End to John O'Groat's. It started on 12th January and there are hundreds of bloggers involved pulling the community together like never before.  There are 38 regional teams aiming to raise double what Team Honk raised last year for Comic Relief to £20,000 for Sport Relief. And earlier this week Ellen Arnison kicked off the first official Sport Relief mile of 2014 with Prince Charles, Matt and Alex from the One Show and the X-Factor runner-up (who she says brought about the most excited squeals of all among the other runners) Nicholas McDonald.  All kinds of people are taking part in all kinds of sports in all kinds of outfits.  Which makes my efforts look extraordinarily tame because I couldn't walk / jog like I'd planned to because of a chest infection (hence the wrap around warm cardi I wouldn't discard altogether) and anything else more adventurous might well have jeopardised the brilliant results that my knee operation brought about.  But - Ta Dah(!)....

... I do have a friend of a friend who likes to do bike rides for charity, so handed the baton to him a full couple of metres from where it had been received and while I sauntered off to do the, let's say, awkward, school runs looking like a slapper, then grappled with the glares of the gas men working the entire length of our street so I had to park right at the end of it and endure a walk of shame home whilst putting on a grin more like the Cheshire Cat than Alice herself,  he was busy being EPIC, cycling 16 miles over the Sussex Downs all the way to Eastbourne on my behalf, which I think you'll agree is worthy of some sponsorship!

You can please CLICK HERE to donate towards our Brighton team total or text HONK to 70005 to donate £5 to the central one.  We really don't mind which!

Here's the hero of the hour, Matt (from Murcia Golf Properties - #justsaying) 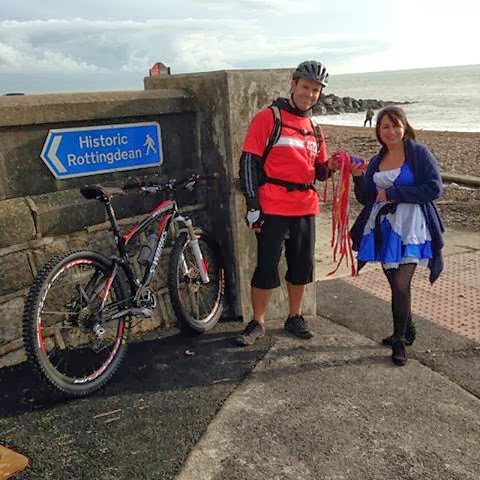 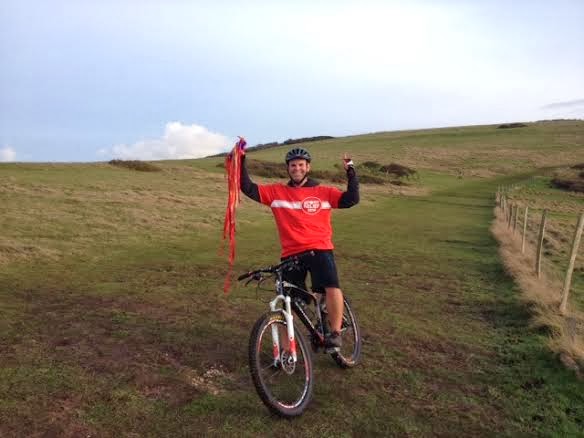 The relay is due to finish on 23rd March and you can follow all the latest excellent fundraising shenanigans on -
Team Honk's FB Page - https://www.facebook.com/teamhonk
Team Honk Twitter - @team_honk #teamhonkrelay
Sport Relief Twitter & Hashtags: @sportrelief  #SR14


What's the betting, despite all the madness and fun, no-one will be dressed as Noddy?!

Here's the official blurb - The first ever Sainsbury’s Sport Relief Games take place from Friday 21st to Sunday 23rd March 2014. The public can join the fun and games by running, swimming or cycling their way to raising cash at over a thousand venues around the country, including the landmark events at Queen Elizabeth Olympic Park.

As one of the biggest fundraising events, Sport Relief brings the entire nation together to get active raise cash and change lives. The money raised by the public is spent by Comic Relief to help transform the lives of some of the poorest and most disadvantaged people both at home in the UK and across the world.