''Deck the halls with boughs of holly
Fa-la-la-la-la, la-la-la-la


Ooh 'tis the 1st December and time to officially let Christmas in the door.  I swear it gets harder each year to keep it at bay and have to confess to caving to mince pies already.

Plus, I've already been road testing these little stunners - reduced from £50 to £25 in House of Fraser. Oh, the double #shame of starting so early! 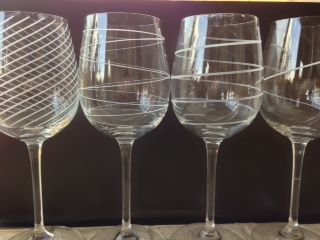 Anyhow, I think they're sold out of these specific ones presently, but beautiful wine glasses are a great idea for a gift for people who wouldn't spend that kind of money for themselves.  The etching is very fetching (!) when shown off with a similarly gorgeous red, but it starts to come off if you give them an every day bashing, so they're meant for an occasion and I wouldn't dream of loading them in the dishwasher, even though they're supposed to be able to withstand it.  I do love them - they definitely add some extra pzazz to opening a bottle when friends come round. 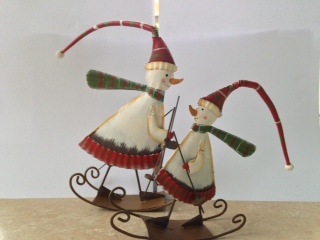 And, indeed, it's time to get the decs down and then up! For the last few years, I've made a point of investing in one extra special piece to add to our collection and these give me an additional thrill when they come out.  Of course, you can wait for the sales for those really expensive items, but we're not that patient, so we go for something in the middle.  This year, we fancied a big snowman but these smaller ones have come our way from culture vulture.  They rock on their little sleighs / sledges / sleds (I still can't decide which would be the correct term, especially as they're carrying skiing poles!) and their hats are springy. We love these too.

Today is the day that the children traditionally send off their letters to Father Christmas and even though, this year, we've been playing with the Argos Wish List App which emails him directly, they've got them ready for posting later on 'just in case!'

We've had some fun with the app though.  It plays the jingly jangly Fa la la la la music which got us in the mood immediately and despite being designed for kids 3-7, the eldest (9) really enjoyed it too. Fortunately, they've put the same items on both sets of correspondence, so as not to confuse me the great man.  They're offered a selection of 'Top Toys' plus all their other departments broken down into themes.  No prices are shown which adds to the feeling that they're coming straight from the North Pole and limits can be set privately by the adults anyhow - re maximum costs and numbers of presents that can be requested.  I found it very useful and equally alarming to receive a copy of the email outlining what they've secretly asked for, seeing as they've changed their minds from the things we've discussed to date!

Here's the official video that tells you all about it.


So that's us off to a great start!  How are your plans going?  When do you officially let Christmas in the door?
Posted by Older Single Mum at 14:26